How smartphones are proving clickbait for fishermen 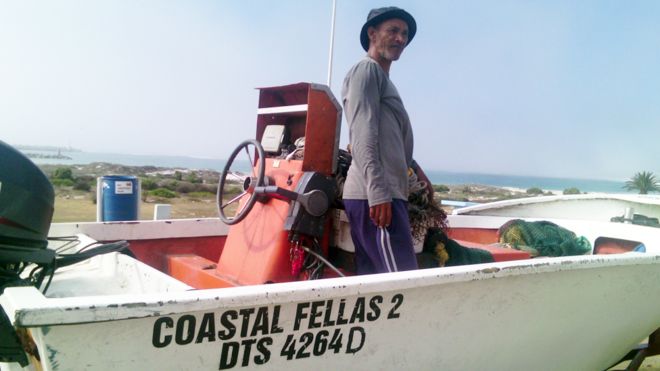 03 Feb How smartphones are proving clickbait for fishermen

Posted at 07:54h in General News by breakwater_admin
Share 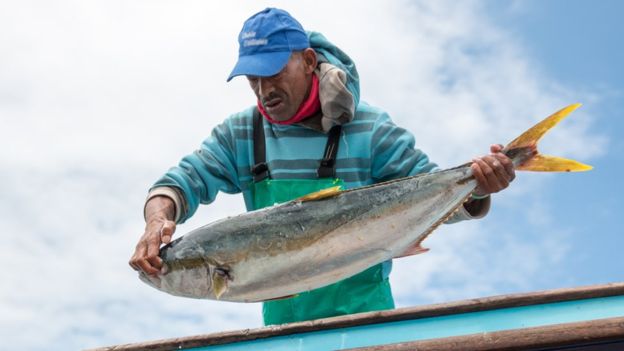 Braving the choppy waters of the South Atlantic four days a week, fisherman David Shoshola says a mobile phone app is helping him worry less about the risk of not being able to support his family.

The 50-year-old and three colleagues fish from two small, open-deck boats based in the seaside town of Lambert’s Bay, on South Africa’s windswept west coast.

Fishing using lines rather than nets, they typically catch just 20 fish a day per vessel, with the main species being snoek (a type of mackerel), and sea bream.

It’s a tough life, and like anyone in his trade, Mr Shoshola has two main concerns – finding the fish in the first place, and then being able to sell his catch.

A new app called Abalobi is helping him to do both more easily.

The app, which is being piloted by the University of Cape Town, utilises GPS so Mr Shoshola can record for future reference exactly where he had a good haul. And he can now sell the fish via Abalobi before he has returned to shore, easily finding out the best possible price.

“It has removed a lot of the worry,” he says. “I have a wife and three kids to support, and it gives me much more security.”

With the help of a growing number of apps and digital services such as Abalobi, it has never been easier to pinpoint the exact spot where the prized fish await, and then sell them after you have caught them.

But with ever increasing concerns about depleting global fish stocks – the United Nations claims that 90% of the world’s stocks are either full-fished or over-fished – is that a good thing?

Many of the digital fish trackers, including Abalobi, claim to have conservation at their heart, but not everybody is convinced.

“The problem is that in practice all that happens is unscrupulous people use apps to target the fish and wipe them out even quicker,” says UK fishing expert Matt Hayes, who runs an Atlantic salmon fishery in Norway.

He is also worried that small-scale fishermen could ultimately become unemployed.

“I wrestle with it a lot. It concerns me.”

However, Dr Clive Trueman, associate professor of marine ecology at the UK’s National Oceanography Centre, is more positive about apps like Abalobi.

“It’s nothing that commercial fishermen haven’t been doing by word of mouth for centuries,” he says.

“Some of these apps may also end up being very effective for scientists and managers to work out where the fish are, and where they are going.
“We can use them to catch more fish, but also to direct conservation.”

Serge Raemaekers, a fisheries researcher at Abalobi, says that conservation is at the very centre of their scheme.

Using Google’s cloud platform technology, data collected by the fishermen is to be shared with students at the University of Cape Town who are monitoring the sustainability of South Africa’s fish stocks.

The fishermen can also use the technology to monitor stocks, and stay away from any areas where they themselves think the fish population should be left to recover.

Technology is also being used on a worldwide scale to protect fish stocks.

It does this by utilising the fact that more than 200,000 sea vessels constantly transmit their position, speed and direction via the global automatic identification system (AIS).

GFW, which also uses Google’s cloud computing services, already has more than 25,000 registered users, and more using the website without logging in.

“Anyone who is interested in a vessel, and wants to know where it is today, can go to a variety of sources that provide real-time data, and see where it is at that moment,” says Jackie Savitz, senior vice president at Oceana.

“Authorities find out suspicious activity and then track vessels down.”

Suspicious activity includes ships that switch off AIS or don’t use it at all.

“It’s possible the bad guys turn off AIS,” says Ms Savitz. “But we can see when they turn it off, and we see it when it comes back on.”

GFW has already notched up some success stories – using its data, a vessel was caught fishing in the Phoenix Islands Protected Area in the Central Pacific and forced to pay a $2m (£1.6m) fine to the Republic of Kiribati, one of the poorest countries in the world.
Expansion plans

In Italy, the University of Bari has partnered with US technology group IBM since 2012 to pilot a similar cloud-based fishing app to Abalobi.

The organisations say it has resulted in more targeted fishing, with the fishermen only catching as many fish as the market demands.

Back at Abalobi – which means “traditional fisher” in the isiXhosa language – the project has secured grants from the South African government. It has also been helped by mobile phone network Vodacom allowing the app to be used data-free.

More than 100 South African fishermen are now signed up, and Mr Raemaekers says Abalobi is receiving interest from groups in the Seychelles and the UK.

Mr Shoshola adds that using the service is helping him and his three friends expand the business, because for the first time they have recorded data that they can take to the bank and use as evidence to help them hook some loans to grow their fishing operation.

“I have got the numbers of every daily catch,” says Mr Shoshola.